Last Thursday my baby turned 21 and yesterday I threw her an “old lady party” with lots of sweet drinks, sugared desserts, and of course: quiche. The assembled “village”of her life sat in our sun drenched living room with smiles, laughs, and love in their eyes. After tearful toasts, more food, warm hugs, and heartfelt goodbye’s the house was silent. Everyone had left for their lives.
I shuffled to the shower and let the warm water slide over my head. Under my man made waterfall I took a moment to reflect n my life so far. How fortunate I have been so far. Even my heartbreak has been in most ways fortuitous. There is not much else I can ask for in this life and a multitude of things I give thanks for daily.
So, if this is the second adulthood of which I have read and studied, what happens next? I pondered what should I do next. Taking stock of what I have and what I want will be first. The first part is relatively easy, but the latter may take some time. I’ll let you know.

When I was a teenager there was a magazine campaign featuring legendary actresses sporting mink coats. The photos were tres chic but, I was more taken with the tag line: “What becomes a legend most?” I never thought that I would feel the same as those high fallootin’ celebrities. Fortunately, being a mom has become the greatest role of my lifetime.

So, on the anniversary of my daughter’s break out role as a new soul coming to the planet, I want to thank her for the twenty six years that she has allowed me to take credit for her beauty, innate goodness, and fascinating mind. Nikki makes me look good and that ultimately will be what becomes my legend. No mom can ask for more. 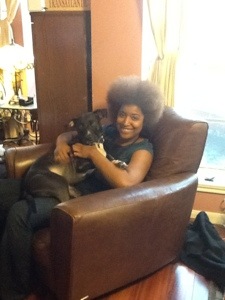